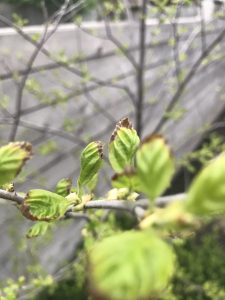 Hi. My tree leaves seem to be browning and shriveling. I have a black walnut tree in the yard about 15-20 metres away. Could this be the cause? If so, what trees would be resistant and waist tall grasses?

Thank you for contacting the Toronto Master Gardeners.

Brown tips often indicate drought in spring and summer. Since this has been an especially wet spring I don’t think that this is the case. It could also be caused by transplant shock. You never mention if this was a newly planted tree. Leaf margin damage is often worse where exposure to wind dries out leaves. The damage could also be due to extreme fluctuations in temperatures on newly emerging leaves. Brown Leaves on Woody Plants gives control measures on how to treat these symptoms.

Species that are sensitive to juglone will exhibit symptoms such as wilting and yellowing of the foliage. The harmful effects of juglone ( the chemical produced by the walnut tree) on surrounding plants can depend on the soil and its moisture conditions.  Good drainage may decrease responses to juglone, thus when planting near a black walnut tree enhancing soil drainage would be beneficial. The Master gardeners have a Gardening Guide on Juglone and Black Walnut. This Guide lists the plants which are suscptible to Juglone and lists those perennials and grasses which are tolerant of this chemical.

More recently in an article titled Do Black Walnut Trees have Allelopathic Effects on Other Plants? brings to light that the what we originally thought about Juglone and it’s effect may not be the case.