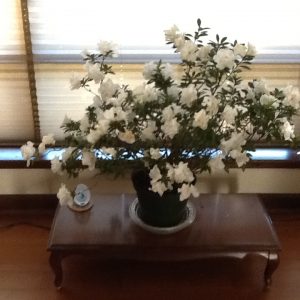 Here is a picture of my 25 year old azalea. It has been in full bloom since the end of January 2018 (it is now March 25). For the last few years I’ve dug a hole in a shady area of the garden, placed the pot in the hole, watered it often & left it there until fall. I bring it in the house before frost. It has become a little lopsided & I would like to know how to prune it back to even it out.  I would have to prune quite a bit on the upper right side & am concerned that this may harm the plant or that maybe this spot would not bloom again. I water it with a weak 20 30 20 Schultz Plus fertilizer starting when I bring it in in the fall. I haven’t fertilized while it is outside…should I? My question is how to safely prune this plant plus any other tips you may have for me to continue to care for this wonderful plant that is so beautiful.

The best time to prune your azalea is in the early spring before any new growth is visible, or once the flowers have faded, but before new buds have emerged, which is usually before early July. If you prune later than that, you will nip off future flower buds, so won’t have flowers the next year – but don’t worry, flowers should return to the spots you have pruned.  Be careful not to prune any single branch back by more than one-third, and don’t remove more than one-third of the branches at once.

You seem to have a formula that works well for your plant – I don’t suggest changing anything. By bringing your azalea inside before the first hard frost and giving it lots of light and fertilizing it every couple of weeks, you are providing good conditions under which the plant reliably rebloom indoors during the winter.  When you move it outdoors in the summer, consider fertilizing it (until mid-summer or so) – although it seems happy enough just being left alone.

The Azalea Society of America provides good information about pruning and fertilizing azaleas – e.g., go to the dropdown menu at “Azalea basics” to “growing azaleas”.

By the way, I think that your plant looks lovely as-is!