We have a very mature Japanese maple in south Toronto, east of High Park- likely over 30 years old. Today I noticed masses of white flat oval insects on areas of the trunk and to a lesser degree on some of the branches. They appear to like areas where there may be exposed sap.  There are areas of bark that are split open in spots and this is where they seem to congregate. What are these insects and how do I get rid of them? 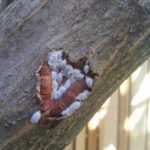 The insects in the photo you provided are mealybugs.  Mealybugs are a type of scale insect that feed on the sap of both indoor and outdoor plants. Female mealybugs often gather in dense numbers in crevices on trees, just as in your photo.  Mealybugs get their name from the powdery waxy layer that they produce for protection as they feed.  Mealybugs can damage trees by sucking out sap.  When they gather in splits in the bark and pruning scars in great numbers, knot-like galls can form, interfering with healthy tree growth.  Mealybugs also excrete a honeydew which encourages the growth of sooty mold, and attracts other insect pests. The insects overwinter on tree as eggs within white cottony masses.  The eggs hatch in the spring, and the nymphs feed on leaves and young stems.

Mealybugs can be difficult to control. Your first line of defence is to physically remove as many adult females from the bark as you can by spraying with a hard blast of water from your garden hose, and then picking off or crushing any adults that remain behind.  You can also apply an insecticidal soap, carefully following the manufacturer’s instructions.  Horticulture oil (or dormant oil) should be avoided on Japanese maples.  Mealybugs can spread to other plants and trees, so be sure to monitor the rest of your garden carefully.