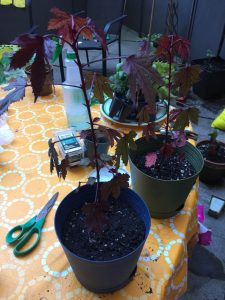 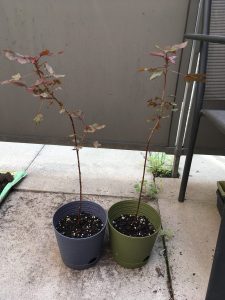 I picked up a couple hibiscus plants (African rose mallow, seedlings they were 10cm tall?) at the Allen garden spring fling this year. I kept them indoors for a few weeks as they grew tall and increased foliage. I then re-potted them (into a mixed medium potting soil, with not the best drainage I’ve learned over the summer) and took them outside (mistake 1, I didn’t slowly introduce them, but it was warm enough by then). They grew taller and more leaves, though then I started to notice the leaves looked like they were being stripped (as though layers were being taken off). There was webbing on them, too, so I thought they were succumbing to the red spider mites that seemed to be overrunning my veggies. Being the rookie gardener I am, I first sprayed them with soapy water, without success. They continued to deteriorate and leaves falling. I then gave in and tried a ‘green’ pesticide. Leaves almost entirely fell. This was at the same time as that crazy heat period in mid-June was too much for them and I was away and the person watering my garden didn’t think to put them in shade. A few grew back but then the same stripping and dying. They lay as 30cm twigs for several weeks, the odd leaf coming and going. The webbing present.
I went away a couple weeks ago to find them growing at the top again, and taller. The little leaves still curl and dry but the top ones look healthy for a bit. I think spiders still an issue.
I’ve attached pictures, first what they looked like growing after reporting (and when leaves started to point down and fall) and what they look like now. I’ve been wondering and cutting them and trying to propagate them. I’m not sure it’ll work (and have been told it may not be worth it). But I thought to get some advice.
If I’m general you have advice on spiders, that too would be appreciated.

The African Rose Mallow is not hardy in Ontario, but can be overwintered as houseplants in colder climates like ours.  The plants are happy being outdoors during our summers.  It is important to keep them as healthy as possible, so they can resist pests and diseases.  Your hibiscus plants should be in pots with well-draining soil and placed in an area where they get at least 6 hours of sunlight each day.  Don’t over-water them, but keep the soil moist and don’t allow them to dry out (spider mites love dry plants).  Fertilize the plants with a high potassium fertilizer once a week or so during the summer.

From your description of the webbing, it does sound like you may still have spider mites.   To get rid of these critters, spray them off with a hose.  Lie the plant on its side, and spray it hard with a stream of water, 3-4 times a day every 5 days or so. Ensure that you spray the entire plant – the stems, tops/bottoms of leaves — don’t miss any spots, as spider mites can lurk in many places.   After you finish spraying, spray the ground underneath the plant hard with water to drown any mites that fell onto the ground.

I’d suggest that you do not try and propagate the plants until they have been healthy for several months.

Here are a few helpful resources: