Hello, I bought this beautiful little plant back in November (took a while of searching to figure out what type of plant it was – i think a peperomia clusiifolia pericattii???). It seemed healthy and the leaves continue to look healthy, but all the spindles (not sure if that’s what they’re called? Or in fact what their purpose is) have fallen off. There was one really long one (about 12cm) and 2-3 shorter ones at first (I’ll attach a picture of when it was purchased). Throughout December they all fell off, one at a time. I don’t see any new growth. Otherwise, the plant and leaves seem to be doing well. It’s definitely not overwatered: I’ve been strictly drying out my plants because of fungus gnats (many have been over dried, with soil pulling at edges, but not this one). Any idea why the spindles may have fallen, and is there something I can do better to care for this? Thank you! 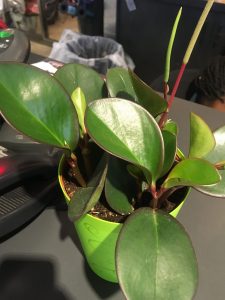 Regardless, the spindles or spikes you are seeing are actually the flowers of the plant which will naturally fall off as they finish blooming. A number of the references I found noted that the plant may produce green-white flower spikes with emphasis on the ‘may’ so don’t be alarmed if there aren’t a lot of future flowers.

Sounds like you are taking good care of your plant particularly with respect to watering. The general advice is to allow the top one inch of soil to dry out between waterings. Peperomia like bright, indirect light such as a north or east facing window. They prefer temperatures of 18-24° Celsius and do not do well if the temperature drops below 15°.

Of botanical interest, Peperomia are part of the Piperaceae or pepper family. The name is from the Greek and means resembling the black pepper plant. If you’d like to read more about Peperomia, I’ve included a link below to an interesting article from the University of Vermont: