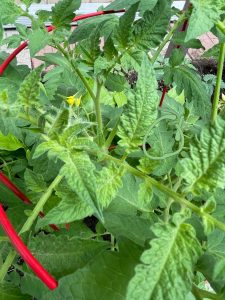 I found some very small black flies on tomatoes leaves and stems. (Please See the circled area in the photo. ) I also saw small small holes on leaves. What should I do ?
Thanks for your help.

Thank you for contacting the Toronto Master Gardeners. Unfortunately I can’t see the insects in your picture clearly, however I think it is probably flea beetles or aphids.

I can see some damage on one of the leaves that looks like the small holes you have described. Adult flea beetles chew holes like this. They are a common pest found on many vegetables. They are tiny and can be black, brown, bronze or striped. They move very fast when disturbed, leaping out of sight; that is they jump, they don’t fly. Flea beetles are most harmful to seedlings, in the spring. Larger plants like yours are mostly able to withstand the damage. Heavier infestations may cause bleached or pitted areas on the leaves, ragged holes, or even total loss of leaves resulting in wilted or stunted plants. Adults overwinter in the soil and plant debris, emerging in spring to feed. They lay their ages in the soil and usually die by mid-summer. The larvae hatch in a week and feed on the roots for a few weeks, usually causing little damage. The larvae pupate in the soil and mature into adults in 2–3 weeks. There is usually only one generation each year, sometimes more.

You might want to put some yellow sticky traps (available at garden centres) around your plants to check if you do actually have flea beetles. It’s not usually necessary to treat flea beetles in the summer because they die off and the more mature plants probably won’t be badly damaged by them. I can’t tell for sure from your picture but I think your plants are in the garden vs in containers. If they are in the garden you might want to treat the soil with nematodes to control larvae, and practice crop rotation next year, replacing the tomatoes with something that is not susceptible to flea beetles. If they are in containers, dispose of the potting soil at the end of the season  so that no adult flea beetles will overwinter there, and start next year with fresh potting soil.

The other possibility is that the insects on your plants are aphids. These are also very common, small (although larger than leaf beetles) and can be green, black, red, yellow, brown or grey. Adult aphids can be winged or wingless. Their mouthparts pierce young leaves and stems and they suck the sap. They are usually found often in clusters on the undersides of leaves. The damage caused by aphids is twisted yellowing leaves and stunted or dead shoots. The tell-tale sign of aphids is a sticky secretion called honeydew which can be found where they are feeding and which attracts others insects and encourages the development of a fungus called sooty mold. The most common ways to treat aphids are a high-pressure spray from a garden hose to knock them off the plants, and/or spray the entire plant (including the undersides of leaves) with insecticidal soap.

Good luck with your tomatoes !