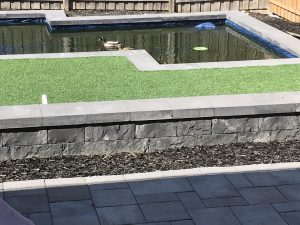 Hi!
We have a flower bed beside a decorative wall/bench in our backyard. The wall divides the yard from stone to grass.
We would like to plant boxwood in the bed along the wall because we know that we can trim it so that it doesn’t get too high and block our view of the pool.

My questions are, our yard is in full sun. Is there something special (soil, fertilizer) we should plant the boxwood in? Should we buy dwarf ones? If you don’t suggest boxwood, can you recommend something else?

We are gardening newbies, so our knowledge is very limited.

Thank you so much for your help, we truly appreciate your time!

Hello – Thanks for sending along the photo.  Boxwood (Buxus sp.) would look terrific in that spot. It is adaptable to a variety of soil types.  It has a shallow root system so will require regular watering the first two years till established.  A layer of mulch on the surrounding soil will help to retain moisture.

But there are some recent issues with boxwood that you should be aware of. Boxwood plantings world wide are being severely affected by a fungal disease called boxwood blight.  This disease was first detected in Europe in 1994, in the US in 2011 and in Canada in 2014.  It appears as small black leaf spots and black streaks on stems eventually leading to leaf drop. It can kill young plants and leave older plants extremely unattractive.  Canada has not been as severely affected as some other areas possibly because the varieties we tend to grow here have some natural resistance to the fungus. I’ve copied a link below to an earlier answer we posted on boxwood blight which describes best management practices for dealing with an infestation and the best cultivars to grow.

So the use of boxwood is manageable and there are newer varieties of boxwood coming available which have stronger resistance to boxwood blight.  These plants have been developed by the Saunders Brothers boxwood nursery in the US and are called the NewGen family of boxwood.  The two cultivars introduced this year are: Buxus NewGen Independence and Buxus NewGen Freedom. Saunders has worked with a network of growers to make these plants widely available including Sheridan Nurseries in Toronto.  Should you decide to purchase boxwood, Landscape Ontario, the professional association for the landscape trades in Ontario recommends that you ask your local nursery for written assurance that they have been tested and continue to test for the presence of the blight. Click here to see Landscape Ontario’s full update on this issue.

If you don’t want to deal with the prospect of boxwood blight our native inkberry (Ilex glabra) with small broad, evergreen leaves and dense branching that responds well to shearing is recommended. I’m including a link to a description of inkberry from the Missouri Botanical garden. As noted in their description, cultivars of inkberry typically have better form for landscape use. Two new cultivars of inkberry are being introduced this year: Ilex glabra ‘Strongbox’ and Ilex glabra ‘Gembox’ which are much smaller than the species – a mature height and spread of 2-4 ft/.6-1.2 m.

Enjoy selecting plants for your garden!