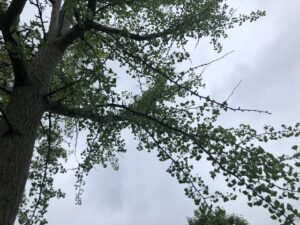 We redid the landscaping in our backyard 2 years ago and need to cut lower branches of our gingko tree to allow equipment in. It is a mature tree standing over 40 feet tall and 20 feet wide. The soil is clay. It has mulch at its base and the in ground sprinkler ensures it gets watered regularly (every other day for 15 minutes). Some branches appear there, some have partial leaves while others look very healthy. I have noticed that the leaves appear smaller than before. Is there something we should be doing to maintain this gingko biloba tree?

Thank you for contacting the Toronto Master Gardeners with your question about your Ginkgo biloba. I can’t tell from your picture, but it sounds like there are fewer leaves growing and some of them are smaller but otherwise the leaves look healthy (not yellowing or browning, not showing any other signs of damage). So I suspect that the landscaping done 2 years ago might have been the beginning of the problem with your tree.

I think your tree might have been seriously stressed by losing its lower branches, and it is slowly recovering. How much of the tree was removed ? There are a couple of rules of thumb that apply to removing tree branches : first, don’t remove more than 1/3 of the tree canopy, and much less than this for a mature tree, remove 10-15%. And second, 50% of the tree canopy should be in the lower 2/3 of the tree, to protect the tree against damage during a wind storm. In addition, removing branches means removing leaves, and removing a large amount of foliage significantly reduces a tree’s ability to provide food for itself via photosynthesis. The good news is that Ginkgo biloba has been around for centuries, and it is generally a very tolerant plant. However it is slow growing and has been severely stressed, so it would likely benefit from some help with its growing environment as it continues to recover.

Ginkgo biloba is relatively drought-tolerant at maturity, so I think it might be getting too much water. Over watering can result in slower growth and smaller leaves. Roots require oxygen for growth and the uptake of nutrients and water, and prolonged soil saturation causes roots to die. Clay soil results in poor drainage, which compounds the problem with over watering. It’s best to water deeply and less frequently, early in the morning, maybe weekly or so depending on the weather conditions. By poking your finger into the soil near your tree, down 2-3 inches, you can see if it’s dry and therefore needs watering.

You have also mentioned that your tree has mulch at its base, which will help to conserve moisture in the soil and therefore also result in the need for less watering. The mulch shouldn’t be too deep, no more than about 2-4 inches deep, so that oxygen exchange between the tree and its roots isn’t restricted. The mulch should also not be up against the tree trunk. Keep it at least 6 inches away to prevent decay in the trunk.

There is more information about Ginkgo biloba available at these websites :

Good luck with your Ginkgo biloba !