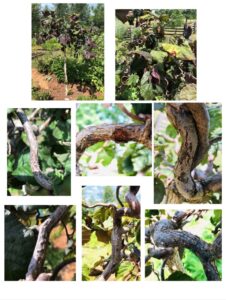 I purchased a Corylus Avellana ‘Red Majestic” top-graft tree in May 2019 from a reputable Ontario wholesale nursery. It is a small tree approximately 5 feet tall. This summer the leaves are turning yellow, dying and falling off. It is in full sun with adequate watering and slow-release fertilizer. I covered it with burlap and mulched it during the winter.

I read an article by Helen Battersby about Easter Filbert Blight

I believe my tree is infected. There doesn’t seem to be a remedy except for cutting out the infected areas. However, the major parts of the grafted top have the telltale marks. The nursery where I bought it has discontinued selling it. Since this fungus takes a few seasons to develop, I wonder if it was infected when I brought it home last May.

I’d appreciate another opinion from the photos before I consign it to the burning barrel. Next time I will buy a Corylus Avellana ‘Red Dragon’ which is more resistant to EFB.

Thank you for sending the follow up photo. I do believe that your tree is suffering from EFB.

According to the Pacific Northwest Pests Management Handbook: “The fungus has a life cycle of 2 or more years including a 12- to 15-month latent period when no symptoms are visible. In spring, spores are forcibly ejected and released in a sticky, white ooze in wet weather…..Infected branches may die suddenly from July to September. Dead leaves may stay on the branch. Elongated, raised bumps begin to form on infected twigs and branches in June. When the bark is removed, the cambium below the bumps is chocolate-brown.”

You are correct, there is no cure for this disease except to prune out the infected branches: however as you know, this will not stop the spread of the disease. My suggestion is to remove it and dispose of it in the garbage. Do NOT put it in your compost, or in your city yard waste collection.