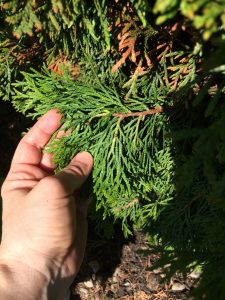 Hello
I live in Welland and have an emerald cedar that is turning brown at the bottom on one side and looking faded and limp throughout. I cut away many of the dead branches. It also has many small brown balls containing white powder stuck to needles throughout the tree, as in the photo. These appear mostly on needles that are looking limp/faded. The tree gets lots of sun and the soil is wetter than usual this year of course. I did not plant it, but I am guessing the soil was not amended very well given conditions elsewhere. It is quite heavy clay. There is a deep layer of stone around the base – no room was left around the trunk. The dying side is in front of the hot water tank vent, so warm air blows on it regularly. It is close to a yew, hibiscus and rue. There are many other emerald cedars scattered about the property, some with the same soiI/stone conditions, but I can only find the brown balls on this one. Is it a kind of fungus? Anything I can do to save the tree? Thank you very much.

Thank you for contacting the Toronto master gardeners with your inquiry on your cedar tree.

From you photo it is really difficult for me to see the “brown balls” that you mention. However, from your description of white powder attached to the needles I believe that your tree has an infestation of Fletcher’s Scale. Please refer to  Scale Insects on Shade trees and Shrubs for an illustration. According to the University of Wisconsin, Scale Insects :

“Fletcher scale (Parthenolecanium fletcheri) is common in the northern parts of the Midwest and Canada and is most frequently found on arborvitae (Thuja sp.) and yew (Taxus sp.). Pachysandra and Eastern red cedar are also susceptible. Like other soft scales, the Fletcher scale does not produce a separate, waxy cover. Instead it secretes a thin, transparent film, which does not totally cover the insect. The amber to reddish-brown nymph overwinters on a branch. The following spring, it feeds heavily as it grows into an adult. At maturity, a single female can produce 500-600 eggs in May, which hatch in late June or early July. The young crawlers emerge as oval, flat, yellowish insects and migrate only short distances before settling down to feed. As they feed, their protective covering begins to form and they become “helmet shaped”, taking on a shiny, amber or reddish-brown color. One generation per year is produced.”

Scales are small (less than 1/8 inch long), and with close examination you can see the white, longitudinal ridges of the males and the dark oystershell shaped females. The scales spend almost all of their life feeding on the same spot while being protected by their hard covering. A scale cover will remain on the plant even after the insect has matured or died.

When a tree is under stress it becomes more susceptible to pests and diseases. The layer of stone around the tree trunk along with the hot air from youtrwater tank is putting your cedar under extreme stress. Removing the stones and adding organic compost to the surrounding area will improve air flow to the roots, improve soil integrity, improve moisture retention and add much needed nutrients to the soil. If you cannot relocate the tree or the heat vent is it possible to deflect the hot air from hitting the cedar and drying out the tree? One of our earlier posts Dying and Browning Emerald Cedars lists important steps that you should take to improve the overall health of your cedar.

If a scale problem is found early, minor scale can be manually removed with a soft brush or toothbrush. By rubbing the scales off of the plant, their mouthparts are injured and they are unable to re-infest the plant. If your problem is further along, you can try suffocating the scale with horticultural oil, available at any nursery or plant store. It is recommended by the Ontario Ministry of Agriculture, Food and Rural Affairs (OMAFRA) as it poses a low risk to humans or wildlife.  Ideally, an oil spray should be applied during the dormant season (winter to early spring) to kill overwintering scales. Repeated applications may be necessary with heavy infestations and should be targeted when the crawlers are most active. Make sure to read the instructions carefully. Some mixtures require dilution and can burn your foliage.

Scale can spread quite easily, it is therfore important to check surrounding trees and plants for infection. if you prune out dying branches from your infected tree, make sure to sterilize your pruners in alcohol before using them on other healthy plants.

After treatment be sure to keep your cedars mulched and watered over the summer months and consider applying a slow release evergreen fertilizer to improve your cedar’s overall health.